This article originally appeared in Forbes on July 12th, 2017:

In a world where trucks drive themselves, data is accessible from anywhere via the cloud and teams rely on Slack to communicate because talking just takes too long, it’s evident that the pace of business has accelerated. This trend may continue unabated, and while the new reality belies a world that’s fundamentally digital and transactional, that couldn’t be further from the truth.

Despite surface-level evidence to the contrary, business is actually regressing to its most basic form — the relationship. As tools and processes evolve, relationships with partners, customers and employees are the only constant and a key area of investment when it comes to fueling growth.

This phenomenon is known as the relationship economy and it follows the demise of the consumer economy, where experts dictated taste and business models were built mainly around cost-per-unit projections. Advances in manufacturing and communication like 3-D printing (additive manufacturing), drone delivery and augmented reality have rendered many of the pillars of the consumer economy redundant, even obsolete. This is natural, as shown in the graphic below – a visual of the progression of economic models over the last several centuries in the West. As societal structures and technology change, naturally so must business processes. 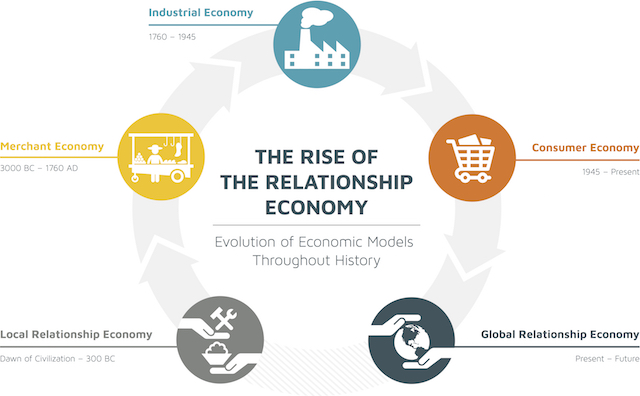 Human beings and their need to connect — to each other and themselves — is driving greater sharing, connecting and transparency in our personal and business lives. As the lines between home and work continue to blur, this trait is influencing economics at scale. It’s the same principle that dictated which stall in a Mesopotamian market 10,000 years ago got the most traction, but now it’s determining the fate of the Fortune 500. Modern technology has made relationships and their implications global.

The internet and the rise of social media have produced a two-way information highway. Suddenly networks are king. People can connect with one another at an unprecedented speed and scale. This has reshaped the business landscape, forming a global economy where business relationships previously not possible are now probable, and expectations are higher than ever.

The relationship economy is built on trust. The transparency of crowdsourced reviews and the internet has brought Milton Friedman’s theories on the viability of consumer-generated “licensing” to reality. Government regulators are running a mile behind waving their arms, while consumers and the market have already determined what’s worthwhile and what’s not.

The instantaneous nature of modern business combined with the rapid scalability enabled by technology means the reference points and metrics of the past two decades are fading. The primary point of reference is now the relationship.

Market leaders are reflecting this new reality in everything from their product positioning to the way they treat employees. Examining product literature (paywall) for the five most valuable brands in the world (Google, Apple, Microsoft, Amazon and Facebook at the time of writing) reveals core messaging that revolves around building relationships.

All of these companies also offer stock options or other forms of part ownership to employees, the goal being to build a relationship between the company and employee by demonstrating mutual investment.

This approach is reflected in M&A and other key corporate strategies as well. Consider the example of Facebook’s purchase of Instagram. Instagram had yet to effectively monetize their offering, and by traditional valuation models didn’t warrant the $1 billion purchase price. Upon review, what Facebook executives saw was a platform that offered a new medium for developing relationships and connecting people. They bought the relationships Instagram had already built and invested in the ones to come.

Companies can build their capital in the relationship economy immediately by focusing on things like customer success, a prospect-centric sales process and providing valuable content. In a world where successful companies focus on lifetime customer value over average selling price, this approach will pay off more than branding efforts. ROI on each customer win goes up dramatically as a relationship is built and loyalty cemented.

Relationships give you a strategic advantage in a crisis, build your brand and create brand evangelists, and increase customer satisfaction. They keep your business moving and define your future, driving tremendous opportunities that result in greater growth.

Thank you. Check your email for details on your request