“If you experience discrimination early in your life, it is always with you. It doesn’t matter if no one ever discriminates against you again. You are always conscious of potentially problematic situations.”

Out of context, it would be hard to guess who said such a thing. It could apply to the life experiences of so many different people. I certainly didn’t expect to hear it from the successful, white, male CEO of my company, but that is exactly who said it.

When I sat down to interview him for a blog post on inclusion for Pride Month, I expected the usual platitudes about diversity making us stronger, how the tech industry is getting more accepting of differences, and how the world is full of allies, if you just look.

Matt Lhoumeau wishes it were that simple.

Instead, he shared stories of hiding his own sexuality as the CEO of a thriving company, Concord. He told me about homophobic slurs directed at him by his own employee after he moved to the supposedly ultra-accepting Bay Area.

Most profoundly, we talked about the tradeoff of hiding your true self from a sometimes threatening world.

Blending In Has A Hidden Cost

Matt learned to be very selective about who he let know about his sexuality at a young age, after family turned him out on his own when he came out at the age of 17. He worked in politics and business in his native France, careful to never let knowledge of his orientation impact the opportunities he received.

“I chose to portray a boring life of staying in on the weekends and doing puzzles, rather than have to answer questions about where I was going out and with whom.”

Silicon Valley culture doesn’t make things easier, though Matt, a careful observer of human behavior, notes that it has nothing to do with geography.

“It all comes down to where power and money is concentrated. Silicon Valley is basically another Wall Street, traditionally run by straight, white men and fueled by toxic masculinity.”

Looking for Signs of the Culture

I thought of my own experiences and those of other women I know in the tech industry. A quick glance at our Slack channel shows many of the men using profile photos of them with smiling babies in a backpack or toddlers climbing on them.

Looking at the women, exactly none of us reveal that we have children. Matt was right, past discrimination breeds future caution.

When I began looking for my current position in a Silicon Valley company, like most of the women (and, I’d guess, other minorities) on our team, I tried to suss out if this company was steeped in the “bro culture” of the area.

I noticed a small message from Matt about a commitment to diversity on Concord’s website. In it, he briefly states his experiences of discrimination from being part of the LGBTQ community and makes clear his commitment to inclusion and diversity as a business leader.

A Big Step Toward Reclaiming Identity

It turns out that message was a monumental step for Matt. Not only did he add that message to the public website, he sent a private letter to his investors and all his employees, essentially coming out after years of avoiding any personal questions.

Why? Why risk it, and why then?

“I was not very happy with myself, I was wasting so much energy every day to not be truly myself. Now that I embrace who I am and am more honest about it, I realize how much energy I was spending on it. It could have benefited the business to not use that energy on that. If I had the company to found over again, I would be really very explicit about who I am and our values.”

Since sending that letter and adding a message to the website, the reaction has been largely positive. He told me, “Since then, many people we have hired told me that that message on the website was a major reason they decided to work at Concord.”

To be honest, it was for me, too. While lack of sexism is by no means a given with LGBTQ inclusion, it’s a good start. Matt actually summed up my feelings perfectly:

“It’s easier to identify with me than some straight white guy out of Stanford.”

Luckily for us both, the remote work environment makes finding an inclusive employer and hiring more diverse employees easier. No longer confined to geographic demographics, we are all able to connect with more options.

Inclusion however, actually listening to all those diverse voices and “including” them in decisions and idea generation, is perhaps more difficult in the remote environment.

Matt acknowledges the kind of personal connection and sharing that leads to trust among coworkers is much easier when you’re passing in the hallways and having lunch together. How can we overcome this obstacle of miles and timezones?

“Gathering everyone physically a few times a year helps, and some of the one-on-one time that we build in digitally. But you have to do it in a way that appeals to individuals. You can’t force it. But Concord is never quite where I want it, in terms of inclusion and diversity. If you think you’re ‘done,’ you clearly have some more work to do.”

In the end, this work of inclusion requires a redirection of energy.

Matt used to spend much of his time and energy deflecting questions from his personal life, trying to blend in, while struggling to feel like himself. Now, all that potential can be directed toward making Concord successful.

As an employee, I believe that Matt’s shift makes more room for all of us.

“I used to approach my own identity as the CEO with sort of a ‘don’t ask, don’t tell’ mentality. If I’m the leader of this company, what message does that send everyone else?” 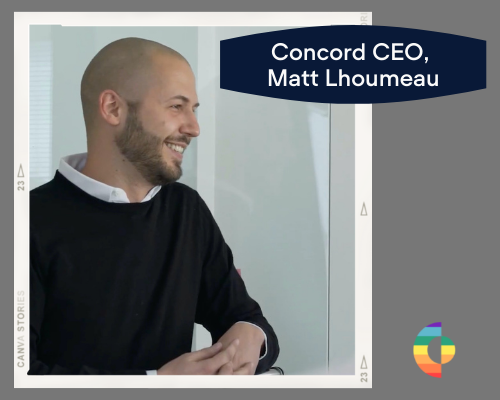 Thank you. Check your email for details on your request